Cash-for-Work: a rigorous analysis of the impacts in Yemen

The Labor Intensive Work Program (LIWP) is a programme run by the Yemeni Social Fund for Development (SFD) to support the poorest population groups in crisis-ridden Yemen. The country has suffered from armed conflict for decades; about two thirds of the population experienced food insecurity in 2020 [1]. A lack of job and income opportunities as well as weak basic infrastructure further intensify vulnerability of the population. The impact evaluation investigates whether and to what extent the program contributes to increasing the resilience of the beneficiaries and thus to improving their living conditions in the long term.

Against this background, fast and effective support measures are urgently needed. As a cash-for-work project, LIWP creates short-term job opportunities to build and maintain basic infrastructure such as roads and rainwater cisterns, but also latrines. This approach allows the LIWP to simultaneously address several bottlenecks: the additional income generated is intended to facilitate project participants’ access to everyday needs such as food and medicine, but also education. The new infrastructure measures aim to directly and indirectly improve the local living conditions, thereby reducing conflicts.

But do these impacts materialise as expected? There are only a few recent studies on the effects of this kind of cash-for-work measure [2] from Yemen or other countries in the Middle East region. A predecessor study (2012/2013) examined the impacts of the LIWP in Yemen and found positive effects on food security. However, the humanitarian situation in the country has changed significantly since then. This evaluation is therefore designed as a rigorous impact evaluation (RIE) and is intended to measure the impacts of the project, incorporate them into the literature and generate evidence-based conclusions for the future.

The LIWP impact evaluation is currently in the design phase and will most likely be based on a randomised control trial (RCT). This method takes advantage of the fact that the programme extends over several years and that, for capacity reasons, activities cannot be carried out in all communities at the same time. In a first step, the communities participating in the programme in 2022 (“treatment”) are compared with the communities participating in the programme in 2023 (control group). If, in a next step, the (average) developments of the treatment communities are compared with those of the control communities, differences can clearly be attributed to the program measures. This eliminates uncertainty about allocation: the (causal) impact of the project on the living situation of the beneficiaries is measured directly.

The evaluation seeks to answer a variety of questions: Does the income of vulnerable rural households increase? Does the additional income improve food security, and does this contribute to strengthening resilience? Does greater resilience improve future job prospects? Do the infrastructure measures contribute to a better quality of life? Has the LIWP reduced conflicts and fostered social cohesion?

The graph below broadly shows how the evaluation analyses the programme’s Theory of Change using the main impact variable “resilience of beneficiaries” as an example;: beneficiaries of the LIWP participate in the labour-intensive construction measures – as well as other measures (e.g. waste disposal) – and receive wages in return. It is tested whether these payments reach the recipients and what incentives they create. The next step is to analyse the impact of the wages on household spending. For what purposes are the wages used? Are the wages spent on essential goods such as basic staples? Increased spending on basic staples can have a positive impact on the food security of the beneficiaries. If food security has been positively influenced, the impact of the project on increasing resilience can be determined in the final step. 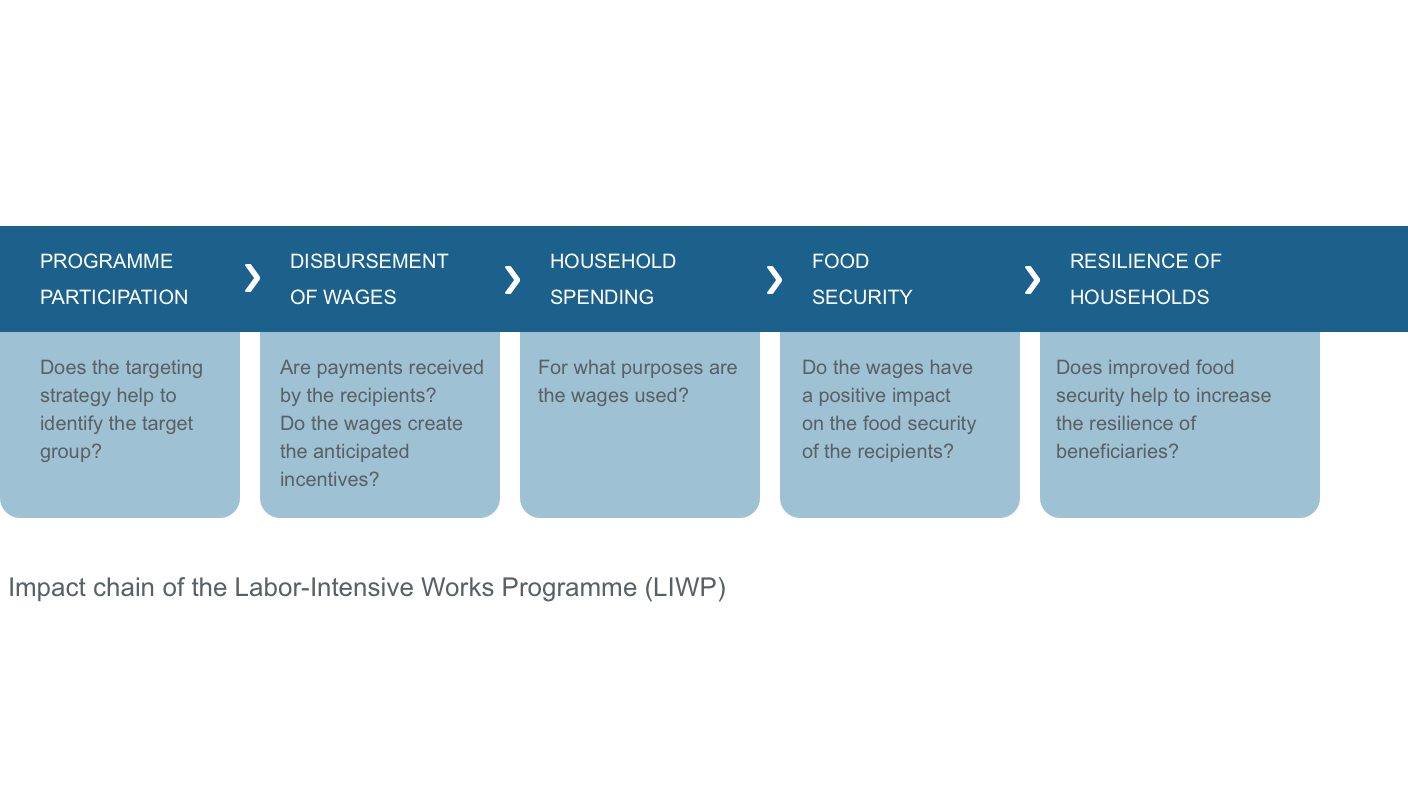 World Bank (2012) in Sierra Leone: Cash for Work in Sierra Leone : A Case Study on the Design and Implementation of a Safety Net in Response to a Crisis (worldbank.org)