Welcome to the PtX Platform of KfW Banking Group

What is green hydrogen?

From grey to green - Power-to-X

Green hydrogen is produced with electrical energy from renewable sources, usually photovoltaic or wind energy. The conversion of electricity from renewable sources into gaseous or liquid energy carriers is known as green hydrogen, or power-to-X (PtX). Grey hydrogen, on the other hand, is produced from fossil fuels. The carbon dioxide produced in the process is released into the atmosphere and intensifies the global greenhouse effect. The production of one tonne of grey hydrogen generates more than ten tonnes of CO2.

What are the advantages of green hydrogen?

Green hydrogen can be used in many ways: as a climate-friendly energy carrier for trucks, for the production of ammonia for fertilisers, for the sustainable production of steel or cement, or even as so-called sustainable aviation fuels. PtX technology therefore not only contributes to decarbonising aviation, shipping and heavy-duty transport and other industrial sectors that cannot be electrified or can only be electrified with difficulty. PtX can also be used to store surplus electricity from wind or solar power in the long term. Green hydrogen can then be converted back into electricity to bridge longer phases of low solar radiation or a wind lull.

How is green hydrogen produced?

Hydrogen is produced by electrolysis. In this process, water is broken down into hydrogen (H2) and oxygen (O2) with the help of electricity. In the "electrolyser" there are two electrodes to which a voltage is applied. Between them is a liquid or membrane - a so-called electrolyte. Oxygen is produced at the anode and hydrogen at the cathode. If electricity from renewable energy is used for electrolysis, it is called green hydrogen. Production by electrolysis is not new. What is new, however, is the combination with renewable energies, as well as the required scale for a substantial contribution to global decarbonisation. 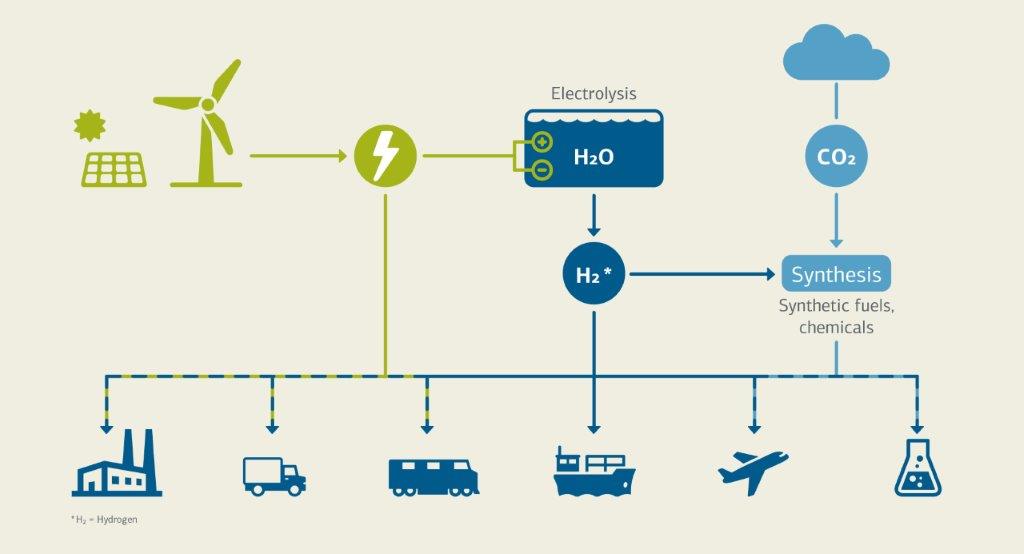 PtX is needed for climate neutrality

Climate neutrality by 2045 - Germany cannot achieve this goal without the use of PtX technologies. But currently, electrolytically produced hydrogen accounts for only about 4 percent of global hydrogen production. Climate neutrality means only emitting as many greenhouse gases as can be recaptured. In concrete terms, this requires a reduction of greenhouse gases by 95 percent (as of 2021). The remaining, hardly avoidable CO2 emissions could be bound by reforestation or stored underground.

How the platform operates

Do you have any questions?

We are looking forward to your inquiry:

Notice: The application criteria are currently being developed. Information regarding the start of applications in 2023 will be published on this website and communicated accordingly.